You are here: Home / News / Don’t exercise, if you want to lose weight! 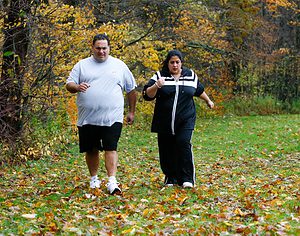 Three studies that will change your thoughts about diet and exercise, and you’ll love the third…

We all know that the best way to ward off unwanted weight is through diet and exercise. But, according to new research from Arizona State University, burning more calories than you eat may not result in changes on the scales.

It has always been assumed that if you exercise consistently, fat will melt off and muscle will form in its place. Exercise has health benefits in every way except weight loss, and this is because it can actually cause you to gain weight, instead of losing.

Researchers from Arizona State University analysed 81 overweight, sedentary women to find out how effective exercise is in regards to weight loss. The women walked three times per week for 30 minutes on the treadmill, for 12 weeks.

Shocking for all of us who intensely work up a sweat (and believe that sweat is our fat crying), the study found that while some women became fitter, many actually gained weight. The researchers discovered that working out did improve the participant’s fitness levels; however, extra exercise did not result in weight loss. 70 percent of the study participants gained weight during the study and most of that weight was from body fat.

More and more research, in both the UK and the US, is emerging to show that exercise has a negligible impact on weight loss. What about doing an aerobics class three times a week? Almost worthless as far as fitting into that little black dress is concerned.

The Mayo Clinic, a not-for-profit medical research establishment in the US, reports that, in general, studies “have demonstrated no or modest weight loss with exercise alone” and that “an exercise regimen… is unlikely to result in short-term weight loss beyond what is achieved with dietary change.”

It sounds quite unorthodox, if not downright flippant, and it’s a scientific discovery that most health professionals are, naturally, keen to downplay.

After all, exercise is still good for us. It’s just that, in defiance of decades of New Year resolutions, it’s unlikely to make us slim.

For 50 years we have been living with many fictitious beliefs about weight loss.

Now the truth is out. Read Olivia's story and the dramatic effect it had on her life.

Then, I would like to send you regular emails to help you to start taking control of your weight and give you a chance to think, feel and relate to food differently. I want you to know upfront that I will send you one or two emails every week.

There’s another, more insidious, problem with pinning all your hopes for a holiday body on exercise.

In what has become a defining experiment at the University of Louisiana, led by Dr Timothy Church, hundreds of overweight women were put on exercise regimes for a six-month period. Some worked out for 72 minutes each week, some for 136 minutes, and some for 194. A fourth group kept to their normal daily routine with no additional exercise.

Against all the laws of natural justice, at the end of the study, there was no significant difference in weight loss between those who had exercised – some of them for several days a week – and those who hadn’t (Church doesn’t record whether he told the women who he’d had training for three and half hours a week, or whether he was wearing protective clothing when he did). Some of the women even gained weight.

Church identified the problem and called it “compensation”: those who exercised, cancelled out the calories they had burned by eating more, generally as a form of self-reward. The post-workout pastry to celebrate a job well done – or even a few pieces of fruit to satisfy their stimulated appetites – undid their good work. In some cases, they were less physically active in their daily life as well.

The good news is the latest scientific findings from the US suggest that an intense workout in the gym is less effective than gentle exercise, in terms of weight loss. Barry Braun, Associate Professor of Kinesiology at the University of Massachusetts, says that the evidence emerging from his research team shows that moderate exercise such as “low-intensity ambulation” (i.e. walking) may help to burn calories “without triggering a calorific compensation effect” – i.e. without making you reach for a snack the moment you’re done. In one experiment, Braun showed that simply standing up, instead of sitting, used up hundreds more calories a day without increasing appetite hormones in your blood.

What all this research shows is that, in reality, there is little or no connection to exercise and weight loss.

It’s fairly clear to us that the expectation that anybody who is overweight needs to exercise, is highly detrimental to the process of losing weight.

At the Surrey Institute of Clinical Hypnotherapy, we specifically advise our weight loss clients against increasing their exercise routine, especially in the early stages of our weight loss programme. We have our clients “defocus” on food, we give them a simple-to-follow and easy-to-implement eating plan and completely dismiss the notion of increasing exercise.

The result is a virtual guarantee of significant weight loss and while that is happening, we work with the client to create and reinforce more appropriate eating behaviours and help them to make far better decisions when it comes to food.