You are here: Home / Hypnotherapy Sutton

The Surrey Institute of Clinical Hypnotherapy is situated less than 2 miles from Sutton town centre. Over the years we have seen thousands of clients from the Sutton area. Because our clinic is just over the Sutton/Wallington border, some residents of Sutton do not realise that there is a specialist hypnotherapy clinic right on their doorstep.

We have been practising hypnotherapy in the London Borough of Sutton area for over 13 years in our well established clinic. The Surrey Institute of Clinical Hypnotherapy is situated opposite Beddington Park, just a stones throw from Wallington Green and the Dukes Head public house. See map for precise location.

At the Surrey Institute of Clinical Hypnotherapy we have specialisations in the following areas:- 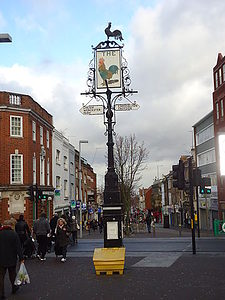 Origin of the name: Sutton

The place name Sutton is recorded in the 1086 Domesday Book as Sudtone. It is formed from Old English ‘sūth’ and ‘tūn’, meaning ‘the south farm’. It was probably in relation to Mitcham and Morden that it was considered southerly. The name was later applied to Sutton Common and the Sutton New Town development in the 19th century.

Archaeological finds in the region date back over ten thousand years, but the first substantial evidence of habitation comes from the excavation of a Roman villa in Beddington. The Roman road of Stane Street forms part of the northern boundary of the parish of Sutton. The course of Stane Street through the area is now followed by the modern roads Stonecot Hill and London Road, and designated A24 on road maps.

The Domesday Book also states that the Abbot of Chertsey held the Manor. This remained so until 1538 when the Manor was sold to King Henry VIII, along with the manors of Ebisham (Epsom), Coulsdon, and Horley. They were all then granted to Sir Nicholas Carew of Beddington in that same year. When Sir Nicholas was sentenced to death for treason, the King seized the manors, and they remained possessions of the Crown until King Edward VI granted part of them to Thomas, Lord of D’Arcy of Cliché, but kept the Manors of Sutton, Ebisham and Coulsdon. Queen Mary later restored the whole of these manors to Francis, only son of Sir Nicholas Carew. At a later date, and for unknown reasons, the Manor once more became possession of the Crown until King Charles II granted it to the Duke of Portland in 1663, who sold it in 1669 to Sir Robert Long, who sold it that same year to Sir Richard Mason. The Manor sold almost all of its land and has regularly changed hands since.

From the time of Domesday until the 19th century establishment of local government and disestablishment of hundred courts, Sutton formed a parish in the Wallington hundred of Surrey, in the feudal system. However, by the time of Richard II, the parish was not required to do suit and pay feudal dues at the Hundred Court—probably the parish was exempt on account of liberties enjoyed by its lord.

The point of intersection of the turnpikes today
In 1755, a turnpike road from London to Brighton was constructed, intersecting with a turnpike road from Carshalton to Ewell which was constructed at the same time. The toll bars for Cheam Road and Brighton Road were originally located at right angles to each other by the Cock Hotel, an inn that sat on the south-east corner of the intersection of the turnpikes. The toll bar for Carshalton Road was where the police station is now, though the existence of this toll bar is disputed. All three of these toll bars moved further away from the intersection after a number of years to account for the growth in Sutton’s size. The northmost toll bar was situated where Rosehill is now. The toll bars remained in effect until 1882.

Sutton railway station was opened on 10 May 1847. Likely due to the new, fast link to central London, Sutton’s population more than doubled between 1851 and 1861. New housing to accommodate this growth was constructed in the Lind Road area, and called the “New Town”. Today, a pub on the corner of Lind Road and Greyhound Road is named The New Town. Sutton Water Company was incorporated in 1863, and the provision of water mains finally allowed houses to be built outside of the area defined by the water-yielding Thanet Sands. The Lord of the Manor at the time, Mr Alcock, sold land that was previously unsuitable for residential buildings, making it available for new construction. Sutton’s population more than doubled between 1861 and 1871.

During World War II bombing was not as heavy as in central London however the Commonwealth War Graves Commission lists 187 civilian casualties for Sutton and Cheam. In 1945 the Sutton and Cheam constituency was constituted. In 1959 a local resident George Alcock started a campaign to preserve a unique avenue of Copper Beech trees. This led the same year to the formation of the Sutton & Cheam Society of which he was secretary for many years. A plaque commemorating his life is situated on the corner of Christchurch Park with Brighton Road.

Sutton came within the area of the Metropolitan Police District in 1840. The parish authorities lost control of poor relief in 1834 when the parish was grouped into Epsom Poor Law Union. This led to the parish forming part of the Epsom Rural Sanitary District from 1875. The parish of Sutton adopted the Local Government Act 1858 in 1882 and a local board was formed to govern the area, which was constituted a local government district. The Local Government Act 1894 reformed it as Sutton Urban District, governed by an urban district council. In 1928 the area of the urban district was expanded, by the addition of the parish of Cheam. The urban district was renamed to Sutton and Cheam to reflect this. The urban district council successfully petitioned for a charter of incorporation and the town became a municipal borough in 1934. Having only nominal existence within a municipal borough, the civil parishes were merged in 1949. The municipal borough was abolished in 1965 and its former area became part of the London Borough of Sutton in Greater London.